You are here: Home / Signs of Emotional Blackmail / What to Expect When You Start Pushing Back

Few of us like conflict. I very much include myself in that group as I, by nature would much rather smooth things over than take up arms. For as much as I’ve been in the news about suing airlines and being in politics, I would still much rather be under a duvet, saying nothing, and keeping other people happy.

When I decided to stop bending over backwards and start speaking my mind, a lot happened. Mind you, I was not a total wet blanket before, but the shift between ‘I can make this work’ and ‘this isn’t working’ was huge and it had a ripple effect all over my life.

To begin, I lost a lot of relationships when I figured out they weren’t *actually* listening to me. Once I started to speak up for myself and call a friend out for say being unkind or not understanding why I needed a straw to drink, it became very clear very fast that certain people weren’t actually interested in me, but in using my friendship to validate themselves and their ego. The more I would make my objections known, the harder I would get smacked down, until a conversation, let alone a relationship, became impossible.

There was also a much clearer sense of what was ‘your problem’ and what was ‘mine.’ It used to be all my problem. If my boss texted me an inappropriate joke, it must have been my fault. If a friend felt hurt because I called them out on their sexism (or any other -ism) I must have failed to act with grace and maybe I should have kept my mouth shut to start with. If someone was unhappy it was my fault, cold, they got my sweater, and angry they could take it out on me.

Pushing back meant that I was no longer at fault for how another person felt so long as I did my best not to cause pain. If someone needed to be called out, I needed to do it the most caring way I could, but people who chose to be upset rather than looking at their own actions weren’t worth kowtowing to or ultimately keeping around.

Also, to be very frank, I got more done. Like a lot more. I also slept better. I didn’t wake up to sunshine and rainbows everyday, but my headspace was no longer caught in rumination mode or wondering what I needed to do to keep people happy. My time was mine, and as long as I did my best to be mindful of those around me, I should and could be focused on my goals. It wasn’t my job to worry about the emotional state of others. Being nice wasn’t as important as being kind and giving people what they wanted all of the time was neither good for them nor me.

Sounds good doesn’t it? Want to know more about bringing the change we need you to, to be in this world and how to self advocate. How about subscribing here? 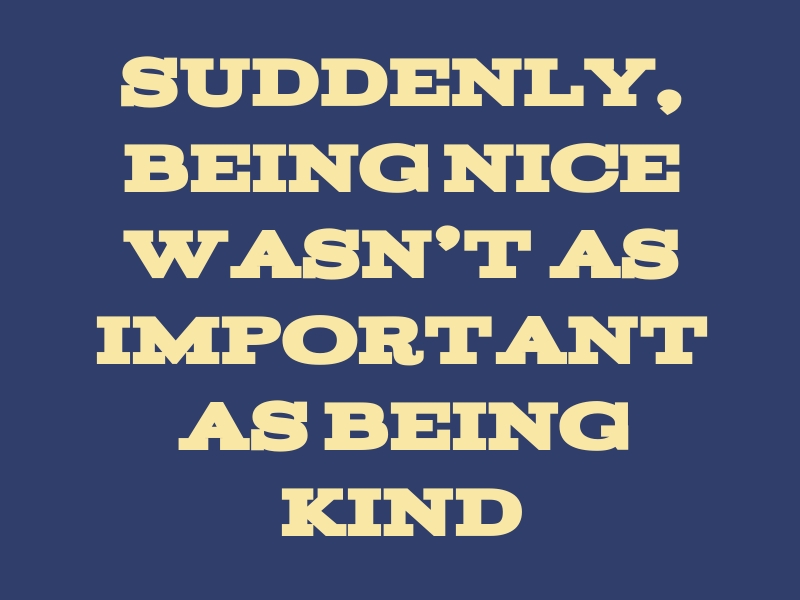