You are here: Home / Signs of Emotional Blackmail / Why You Can’t Just ‘Brush it Off’

I’m sure they didn’t mean anything by it, why don’t you just let it go.’

I have heard this so many times that it’s hard not to lash out at the (usually) perfectly well meaning person who is trying to calm me down. We live in a culture that teaches us, systematically that it is wrong to be angry, somehow ‘not nice’ to confront ignorance, and that we should always turn the other cheek.

Why is it the people who do not face injustice on a daily basis always feel like they are in the right to say ‘just brush it off?’ Is it because they want you to feel better?

Is it because they are looking at their own actions and seeing that, in a culture that fosters complicity, they have had a hand in creating injustice?

Is it because calming down and not making a fuss is actually going to solve the problem?

As I have said before, systematic injustice is not just an assault. It is also a slow erosion of any stability you may think you have in the world. When that value of your soul is called into question on a daily basis in the smallest most insidious of ways, it is impossible to ‘just let it go.’ 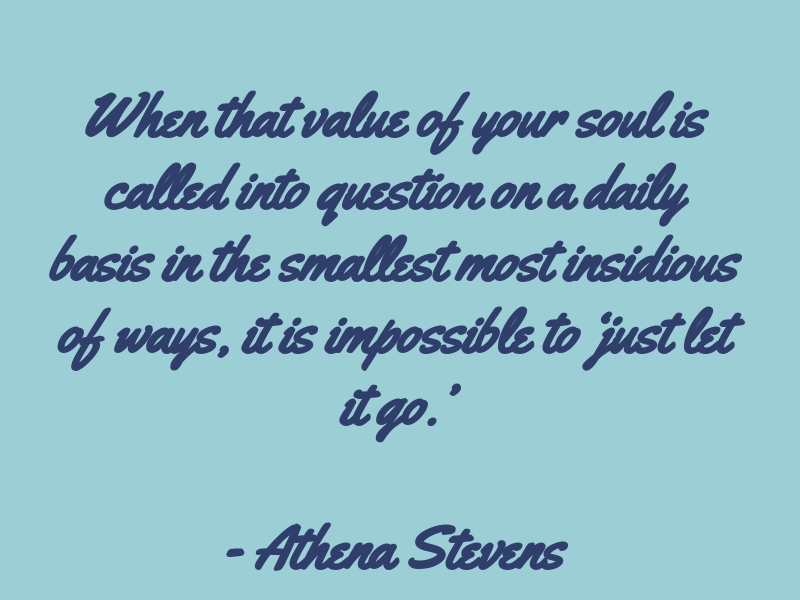 You cannot let the pain of injustice go precisely because it is painful. I’m not talking about a slight to an ego, but actual malevolence that nobody should have to face. Being constantly told that you are not who the world was built for is undeniably painful, to simply ‘brush it under the rug’ is to be further complicit in a system that holds people down willingly.

You shouldn’t be able to simply ‘let injustice go.’ This isn’t about reaching a zen like state or being a ‘good person.’ Anyone who advocates this is scared of a righteous rage that is all seeing, wise, and has the capacity to change the world for the better.

And that is something that many ‘well meaning’ people should be afraid of.